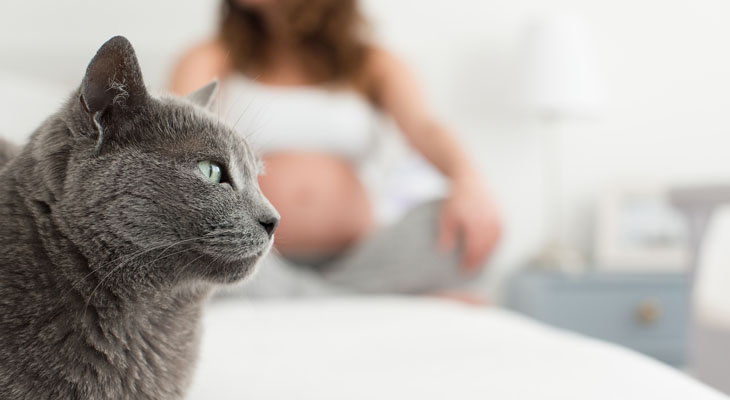 Toxoplasmosis is a disease caused by a parasite named Toxoplasma gondii (T. gondii). This parasite is very common and shows up in pets, people and nearly all other warm-blooded mammals. In spite of this, the parasite does not usually cause any real problems in cats.

Life Cycle of the Toxoplasmosis Parasite

Cats can pick up the parasite by eating prey or raw meat that is infected. Once inside a cat’s digestive system, the parasite can multiply and produce eggs.

Between three and 10 days after becoming infected, a cat will pass the parasite’s eggs in its feces. This continues for up to three weeks. Millions of eggs can be produced during this time. The eggs are very hardy and can survive outside a cat’s body for over a year.

Some of the parasite can also change form while inside the intestine and spread to other parts of the body. The cat’s immune system will eventually control this infection, causing the parasite to go into a “resting” state. These dormant cysts lodge in the muscles and brain.

Before an animal other than a cat can become infected, the eggs in the environment have to go through a process called sporulation. This takes five days. Once eaten, these eggs form cysts in tissues of the intermediate host. These cysts can infect other animals if the tissue is eaten.

Most cats infected with T. gondii will never develop any symptoms. However, cats that have a suppressed immune system have difficulty fighting the infection once the parasite moves out of the intestines and into the rest of the body.

Common causes for a weakened immune system include feline immunodeficiency virus (FIV) and feline leukemia virus (FELV). Young kittens may also not be able to fight off the parasite infection because their immune system is not fully developed.

The most common symptoms of toxoplasmosis in cats include:

The parasite can also cause problems in other parts of the cat’s body, such as:

To diagnose toxoplasmosis, your feline veterinarian uses several tests, such as:

Cats with toxoplasmosis can be treated with certain medications, such as:

Treatment continues until several days after the signs of infection have gone away. Most cats respond to treatment, so if symptoms remain, the cat may have another condition.

How Does Toxoplasmosis Affect People?

It is unlikely for a person to pick up the parasite from an infected cat. Cats only shed the parasite for a few days after they become infected. They also do not carry the parasite’s eggs in its fur. In addition, indoor cats that do not eat raw meat or hunt prey are usually not infected. Experiencing cat bites and scratches is also unlikely to cause an infection in a person.

People are more likely to become infected by:

Two groups of people have a higher risk of becoming infected:

To reduce the risk of picking up T. gondii from a cat:

If you feel your cat may be suffering from toxoplasmosis, contact our office, so we can schedule an exam. We will diagnose your cat and suggest appropriate treatment options.