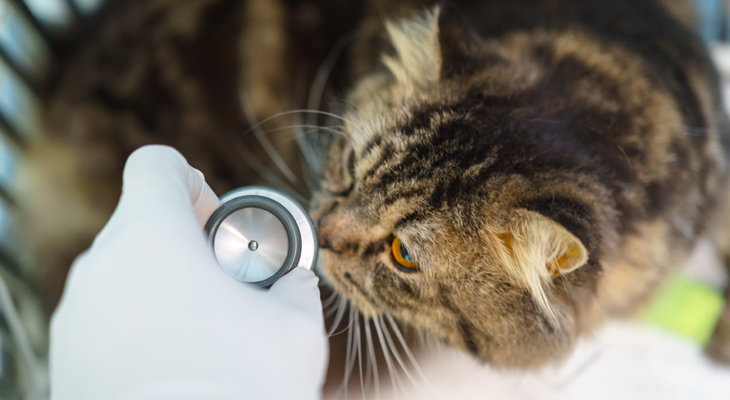 A cat’s apricot-sized heart is susceptible to several problems. Some develop in young kittens while others may strike at any age.

Cardiomyopathy results from a structural abnormality of the tissue around one or more of the heart’s chambers. It disrupts the heart’s normal blood pumping and collecting functions, which can lead to blood clots, respiratory distress and even death.

Some cases of cardiomyopathy are genetic. Others are unknown. Some other diseases, such as hyperthyroidism and high blood pressure, can also cause cardiomyopathy.

This disorder comes in several different types, the most common of which is hypertrophic cardiomyopathy (HCM). This thickening of the left ventricle’s muscle tissue is probably hereditary and most prevalent in male cats. The upper chambers enlarge and fill with blood, increasing lung pressure and causing shortness of breath. Blood clots may develop, sometimes making their way to the cat’s rear legs, where they produce sudden lameness and severe pain. Other symptoms include lethargy and open-mouthed or rapid breathing. HCM is relatively rare and requires immediate veterinary intervention. Medications may stabilize the patient.

Scar tissue buildup in the ventricle’s muscle causes restricted cardiomyopathy. This condition prevents the heart from relaxing, filling and emptying the way it normally should with each heartbeat.

This relatively rare form of cardiomyopathy involves a dilated, poorly contracting left ventricle. This decreases blood from the heart, which can lead to heart failure. Since researchers linked dilated cardiomyopathy to a lack of the amino acid taurine, manufacturers began adding it to cat food. Now veterinarians rarely see this disorder.

About 1 to 2 percent of kittens are born with congenital heart disorders. The most common is ventricular septal defect (VSD), which indicates a hole in the barrier between ventricles. If the hole is small and the pressure between the ventricles weak, the VSD is no big deal. However, a bigger hole can trigger conditions that range from exercise intolerance to congestive heart failure.

Patent ductus arteriosus is another congenital cardiac condition. With this disorder, a connection between the aorta and a major blood vessel fails to close after birth, as it does in a normal kitten. This causes excessive blood to flow from the kitten’s hearts to its lungs. If caught soon enough, there is a simple surgical fix.

All these congenital disorders are characterized by a swooshing sound in the heart. If a veterinarian hears this sound, he or she will assess the defect and devise the best course of action.

If your cat is struggling to breathe and/or has difficulty moving his or her hind legs, heart trouble may be the culprit. Call our office right away so we can help.