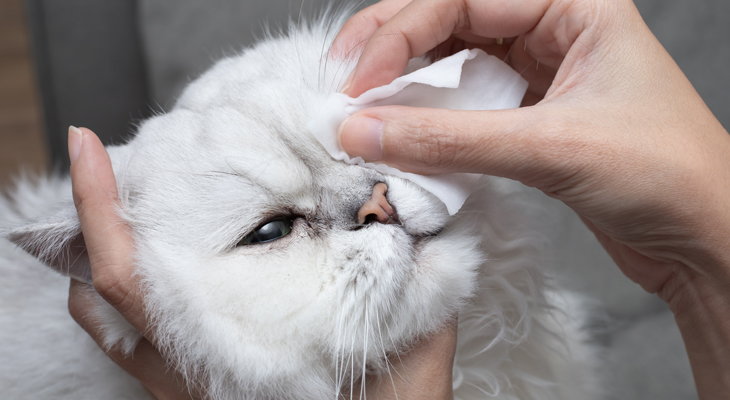 Cats normally have excellent vision—their eyes are about six times more sensitive to light than a human’s eyes. However, injuries and a variety of diseases can impair a cat’s vision and even cause blindness.

You can help your cat keep its eyes healthy by making sure it has regular check-ups and by looking for signs of eye problems yourself. Some vision problems progress over time—sometimes years—so catching these earlier also means that they may be easier to treat. Unfortunately, it is not always possible to restore a cat’s vision once it is lost.

A cataract is a condition where the lens of a cat’s eye becomes cloudy or opaque. This blocks light from reaching the retina at the back of the eye, where light rays are turned into nerve signals that travel to the brain.

Cataracts can affect one or both eyes. In some cases, only a tiny spot on the lens is affected. In other cases, the entire lens becomes cloudy, resulting in total blindness.

The exact cause of a cataract may not always be known, but a variety of conditions can cause this condition in cats, such as:

When a cat loses its eyesight, even just partially, it may have difficulty navigating familiar environments. It may also have difficulty finding its litter box or food bowl or become overly nervous in unfamiliar locations.

Cataracts are most easily treated when caught early on. You may not notice a change in your cat’s behavior, but you can check its eyes frequently for signs of cloudiness. If you notice anything unusual with the lens or your cat’s behavior, contact your feline veterinarian.

Medications can sometimes keep cataracts from worsening. Treating an underlying cause—such as diabetes or high blood pressure—can also help slow down the development of cataracts. If these drugs do not work, surgery may be needed to remove the lens and replace it with an artificial one.

Conjunctivitis is an inflammation of the thin membrane that covers the outer surface of a cat’s eye and the inner surface of the eyelids (conjunctiva). This is the most common eye problem in cats.

Symptoms can show up in one or both eyes. Conjunctivitis can also affect the cat’s third eyelid, which sits at the inner corner of a cat’s eye, between the eyeball and the lower eyelid. Symptoms of conjunctivitis include:

Conjunctivitis has several causes, including:

Conjunctivitis often clears up on its own. However, it is a good idea to check with your veterinarian if your cat has discharge from the eye or some kind of eye discomfort. Other, more serious eye problems can cause these symptoms.

The transparent dome-shape surface of the eye is called the cornea. It lies just below the conjunctiva. It protects the inner eye from germs, dust and other harmful substances. It also helps focus the light so it lands on the retina.

Although the cornea is normally strong, it can lose cells in its outer layer, which is known as a corneal ulcer. If the ulcer worsens, the cornea may eventually develop a hole that allows the contents of the inner eye to leak out. Severe cases of corneal ulcers can cause blindness or even complete loss of the affected eye.

Corneal ulcers in cats can be caused by several factors, including:

Symptoms of a corneal ulcer include:

Minor corneal ulcers can heal on their own within a week. More severe ones, though, require treating the inflammation, pain and any infections in the eye. This may include antibiotics for bacterial infections or a drug used to treat the herpesvirus.

Glaucoma is a condition in which fluid inside the front part of the eye cannot drain properly. This causes the pressure inside the eye to build up, which can damage the optic nerve and cause partial or total blindness. Glaucoma can develop in one or both eyes.

Once damage to the optic nerve occurs, it cannot be reversed. Unfortunately, by the time signs of glaucoma appear, the vision is usually already damaged.

The signs of glaucoma may not always be noticed early on, but include:

Fortunately, a feline veterinarian can identify glaucoma during a regular physical examination. There is no cure for glaucoma, but medicated eye drops may reduce the pressure inside the eye. Steroids are also sometimes given to reduce inflammation. These treatments can slow the loss of vision, but, once the vision is lost, it cannot be restored.

Cats that develop sudden blindness usually have severe changes in behavior, such as bumping into furniture, having trouble finding its litter box or food bowl, hiding out more often or being afraid even in familiar environments.

Several conditions can cause a cat to completely lose its vision in a short time, including:

However, sudden blindness may have actually developed slowly over several months before finally becoming obvious to the owner. Treatment for sudden blindness depends upon the underlying cause. As with all eye problems, earlier treatment may save more of the cat’s vision. However, once the vision is lost, it may not be restored.

White cats are more at risk of deafness, especially when they have blue eyes. However, this hereditary condition does not affect their vision.

If your cat is exhibiting any of the symptoms above or if you think your cat may be suffering from vision problems, schedule an appointment with us, so we can examine your cat’s eye health and explain the available treatment options.